My name is Sander Wamelink, born on the 15th of May 1976 in Haarlem the Netherlands. At the age of 11 my parents took me and my brother on a holiday to visit our family in Africa (Botswana). This holiday had quite an impact on me. Not only because of the adventure of camping in the wild, or the incredible beautiful landscapes, but although people were poor, most of them seemed to be pretty happy. Back home at school, I wrote an essay that in the future I was going to travel the world in a 4x4. Not knowing the means of transportation would change a bit.

I started motorcycle driving lessons in the second year of study. It was something I always wanted to do, I had some money to spend and the driving school was right next door. It all added up. I got my motorcycle driving license the day before Christmas 1999. On Boxing Day it was laying underneath the Christmas tree. A present my mother wasn’t very happy with.

The first motorcycle I bought was a Yamaha XVS650 Dragstar / V-Star. I always loved the sound of V-twin engines and I liked the way this bike looked. I used the motorbike on a day to day basis for commuter traffic. And I joined the Dutch Dragstar Club , which was founded just after I bought my bike. We really had some memorable weekend trips in those early days. But I also found out the bike was lacking power and comfort, especially when riding two up with camping gear. So after one season, I decided to upgrade to the heavier XVS1100, which I crashed after only three months. Although the accident ruined the lateral ligament in my left knee, it never crossed my mind to quit motorbiking. So with the help the help of a DDC member (Paul) I did rebuilt the bike. In the years that followed, I crossed most of the Netherlands. We did some trips to Belgium and Germany and the thought of travelling by motorbike was growing. However it always felt as if the bike wasn’t the most suitable, so it never really took off. Until somewhere in 2008, I first saw Long Way Down on television. If Ewan McGregor can do such a trip, why can’t I? Since then, almost everything I do is in context of my own round the world trip. I decided I had to buy another bike. I tried the BMW R1150GS Adventure and a couple of other allroad motorbikes. It didn't take much to get infected with the GS virus. So I bought mine in April of 2009 and imported it from Germany. 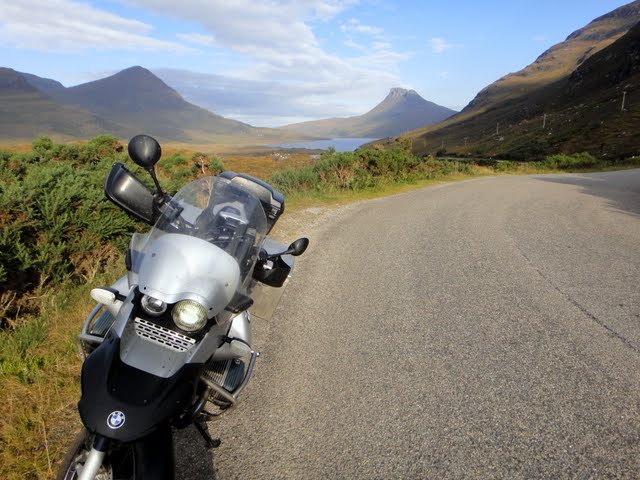 September 2010, after my girlfriend and I broke up after three years of struggle, I had my first real motorcycle holiday. I went to the UK, Scotland and Wales by myself and had a really good time.

As soon as I got back home, I was already planning a trip for the next year. This time I wanted to go to Nordkapp (Norway) and so I did, together with Marianne. Unfortunately not everything on this trip went according to plan. Struck by the scenic beauty of the Lofoten I ended up in a ditch next to the road. Scraping with my face over the tarmac, I broke my front teeth and got some road rash. But what hurt the most was that the bike wasn't rideable anymore. And I had to follow Marianne by car. It were hard times, but together we managed. And I realized I should be doing my round the world trip together with Marianne. And so we did. March 2013 we left on what should have been our 3 year trip. But we went wrong way down and have been riding with the devil. Bad luck has been on our tail. Impacting our relationship in a negative way. After our second failed attempt in 2014 we decided to part and give eachother a break. The dream however is still alive for both of us. And the realisation kicked in that we need eachother to make it happen. So here we are preparing for our American adventure.